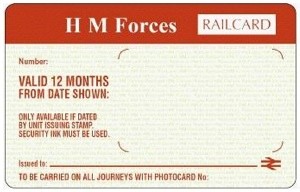 If you are a member of the Regular Armed Forces or Volunteer Reservists or a spouse of a member, you can get 1/3 OFF train travel with an HM Forces Railcard (also known as the armed forces Railcard).

Railcards are a fantastic way to cut the cost of your train journeys, and it works out at less than £2 a month. Both Regular Armed Forces and Volunteer Reservists are eligible so get saving today!

Who can apply for a HM Forces Railcard?

All members of the Armed Forces are eligible for a HM Forces Railcard, wherever they’re stationed in Britain. Wives and husbands of all Armed Forces personnel also qualify for the discount Railcard as well as dependent children of Regular forces.
Full eligibility is as follows:

How much do I get off train travel with an HM Forces Railcard?

You and your spouse will get 1/3 OFF most adult rail fares with the HM Forces Railcard. It’s valid for 12 months and can make your off duty travel loads more affordable.

It’s great because the whole family can benefit from savings on your Railcard. You can take up to four children, under 16 for a 60% discount on regular child fares, subject to a minimum £1 fare, anywhere in the UK.

When can I use an HM Forces Railcard?

Your handy armed forces Railcard will give you a 1/3 OFF most adult and 60% OFF most child rail fares. Here’s everything you can get savings on:

* These tickets need to be booked before you travel.

What restrictions are there with my HM Forces Railcard?

You do need to bear in mind that there are some restrictions with the card. When travelling before 10am Monday to Friday, a minimum fare of £12 applies (except in July or August, or public holidays) if you’re travelling on an Anytime, Off-Peak or Super Off-Peak ticket.

Your discount doesn’t apply on season tickets, Eurostar tickets, some train company promotional offers and most London Underground and Docklands Light Railway tickets (unless using Oyster pay as you go).

How much does an HM Forces Railcard cost?

The HM Forces Railcard costs just £21 and will save you 1/3 on adult fares and 60% on child fares throughout Britain for 12 months.

How to apply for an HM Forces Railcard

To get your Railcard, you must visit your Unit HR admin staff.

The cost is deducted from your pay.

War widows and widowers can obtain an Armed Forces Railcard through the Royal British Legion and will need to receive a Forces Family pension.

How to renew an HM Forces Railcard

To renew your Railcard, you must go through the same application process by visiting your Unit HR admin staff.

For more details on the HM Forces Railcard and full terms and conditions visit the official website.

More Ways to Save with Railcards

There’s plenty of ways to save money on train travel in Britain with Railcards. In the meantime, check out these promotional code discounts and deals on 2022 National Railcards.