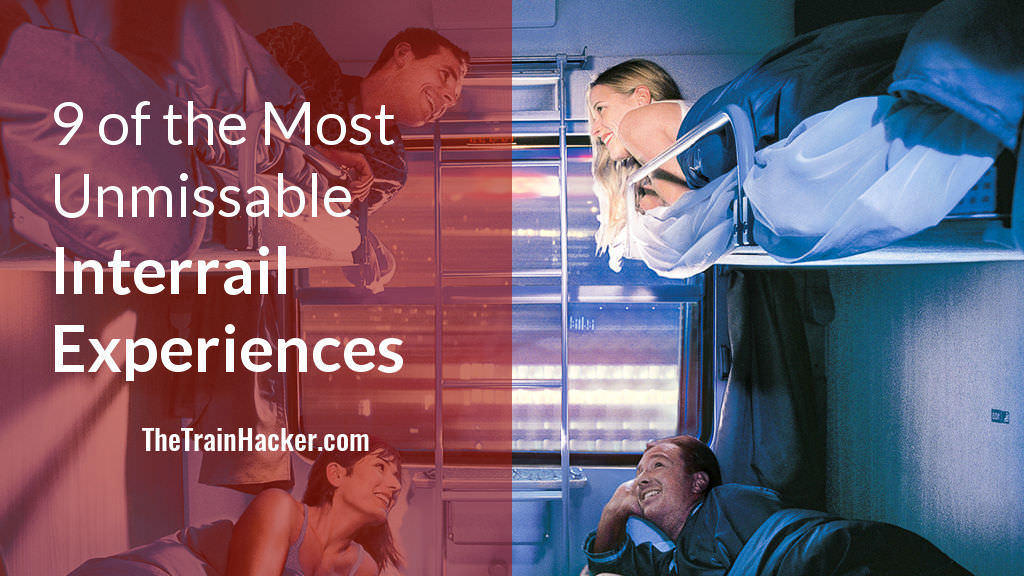 It goes without saying that Interrail is in itself an essential travel experience to enjoy (ditto Eurail for our non-European friends) by any budding traveller who’s set their sights on seeing Europe.

Whether you’re a first-time Interrailer or a seasoned train-hopper, there are certain Interrail experiences which we would pick out as being fundamental to earning your Interrail stripes.

Europe’s fleet of night trains may have seen the sharp end of the scheduler’s axe in recent times, but there are still plenty to enjoy.

Save valuable exploration time by rattling your way through entire countries while you sleep. If you’re cool with sharing, you can bag a bunk in a six-person couchette with a supplement for as little as 15 euros on some routes east of Germany. 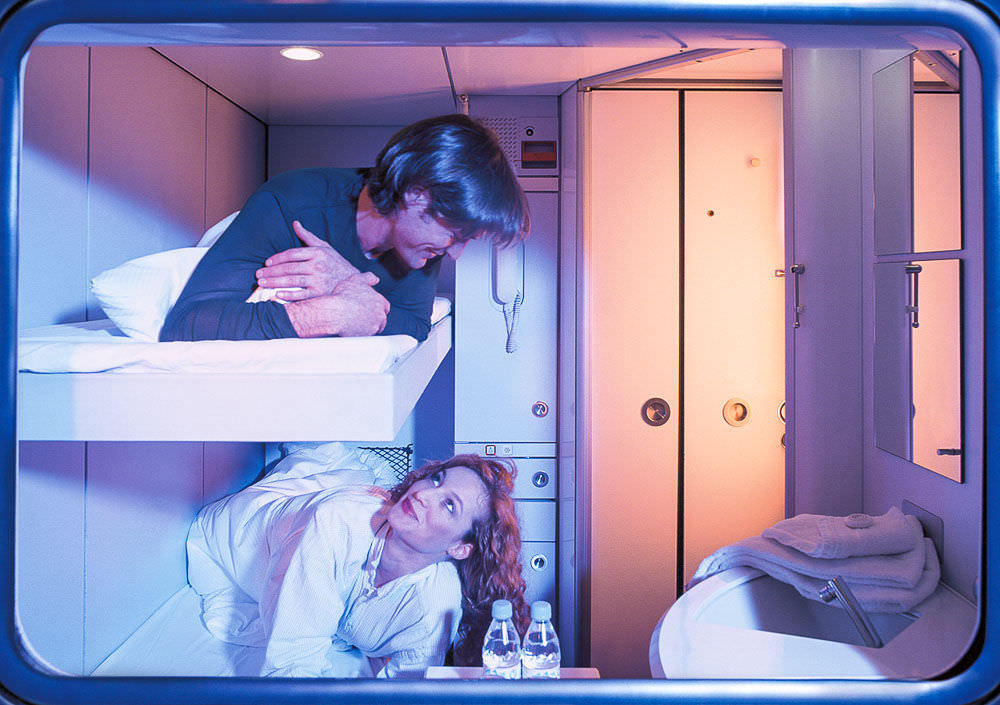 Sharing a private cabin with your loved one – such as this Deutsche Bahn City Night Line – is a cosy Interrail experience – Image credit: Eurail

Private cabins cost more of course, but they’re a comfy option, with a towel, toiletries and simple, continental breakfast often thrown into the bargain.

The Train Hacker and I slept soundly on the EuroNight Kálmán Imre Sleeper between Vienna and Munich last summer, which made our crazy dogleg of a journey more feasible.

Taking a sleeper train is our ultimate, number one Interrail experience.

Missing Your Train and Trying to Sleep in a Park…

… or other awkward public place. If you’ve never missed the last train of the night then take it from us – you’re obviously DOING IT WRONG!

Besides the film Before Sunrise always made it seem like an unspeakably romantic thing to do, so just roll with the punches and chalk it up to ‘life experience’.

Be careful about attempting to sleep in some stations, which are not always the safest places. And, consider investing in a decent bike lock to tether your rucksack to something suitably solid.

Sharing Lunch with a New Friend

You haven’t Interrailed until you’ve broken bread with some fresh faces you’ve just befriended in your crowded compartment. So pack your own lunch and be prepared to share.

Language barriers begone! You’ll be surprised how far a winning smile, a crusty baguette, a cheap bottle of supermarket plonk and a slice of spicy salami may get you.

Meeting fellow Europeans, swapping travel stories, and enjoying some local grub is a classic Interrail experience that’s not to be missed. 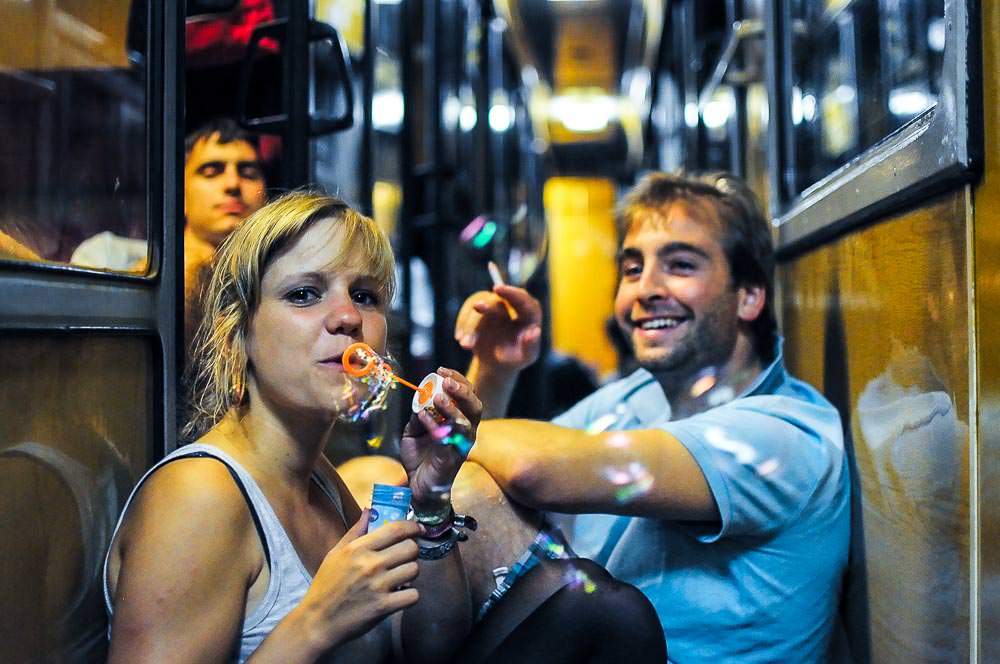 Get into the party spirit and have some fun with your fellow Interrailers – Image credit: felixmontino

And once you’ve deftly navigated those all-important introductions, it could be time to get your glowsticks ready, set your ipod to that cheesy euro-party anthems playlist, and crash a noisy rabble of carriage carousers.

Most night trains have one, and some day trains too for that matter.

You can’t beat a train party, but yet, beware of young males bellowing out Bob Dylan songs whilst strumming the same chords on their acoustic guitar.

These days it’s hard to avoid those pesky supplements when Interrailing. So, why not muster your best Gallic shrug, say in an unconvincing accent ‘plus ca change’ and embrace the quickening pace of life?

It’s true that many slower, local services give you better opportunities to meet characterful locals, and properly appreciate the scrolling landscape outside your window. But yet, there’s still much to be said for saving a few hours by making the most of the high-speed services that now dot the European rail map.

Take your pick from France’s TGV, Germany’s ICE (one of the better value services for Interrailers), Spain’s AVE, Italy’s Italo or Frecciarossa trains, and many more.

Every Interrail trip always includes one day rushing around one of Europe’s biggest cities to see the sights – Image credit: steffireichert

Doing a Mad Dash around a Huge City in One Day

So you’ve got just 6 hours in Berlin, a tatty, beer-stained map, a dying smartphone and a checklist as long as an anteater’s snout. What can possibly go wrong?

Berlin’s East Side Gallery (on the largest remaining section of the Berlin Wall) was meant to be seen hurtling past it from the roof of an open-top bus. So get your walking boots on and see how many must-do sights you can power past.

But Also Saying ‘Stuff It! Let’s Forget about Seeing Brussels, and Have an Easy Beer by the Station Instead’

This was the precise conclusion we came to at the start of last summer’s trip. Yes, it’s a big ole planet, and tempting though it is to attempt to ratchet up as many cities in one epic trip as possible, we all need to stop and smell the flowers every now and then.

Or in our case, stop and sip the crisp, refreshing Leffe Blond in the shadow of Brussels’ gloomy, monolithic Midi Station. Besides, you can always kid yourself that people watching counts as a spectator sport or important cultural research.

What would Interrail be without interchanges eh? A lot less inter-esting we reckon. So what if you’ve only got half an hour in Budapest? You can still offload your hard-earned florins in the airy relic that is Keleti Station’s Baross Restaurant.

And if you happen to find yourself with a few hours to spare at Paris’ Gare de Lyon station, we can heartily recommend splurging on the Travellers’ Menu at the rather excellent and opulent Le Train Bleu.

And did somebody mention checking out one of Amsterdam’s Brown Cafes, like the legendary Bulldog Café… Or did we just dream the whole thing up in a purple haze?

Checking Your Luggage into a Station Locker

Whether you prefer to don a backpack or wheel your suitcase along the cobblestones of one of Europe’s many fine market squares, you’ll have to do battle with a station locker at some point on your Interrail trip. Wedging all your earthly possessions into a space that’s half an inch too narrow for your bag is an unavoidable experience.

So make sure you save a few euros and stash that miniscule ticket stub safely in your jeans’ comb pocket immediately (that’s what it’s for after all).

And don’t forget to compare the latest prices and Interrail pass discounts. That’s one experience you’ll be glad of before you buy your pass.

How about you, which essential Interrail experiences did we miss and how many of these have you racked up on your travels so far? Tell us in the comments!