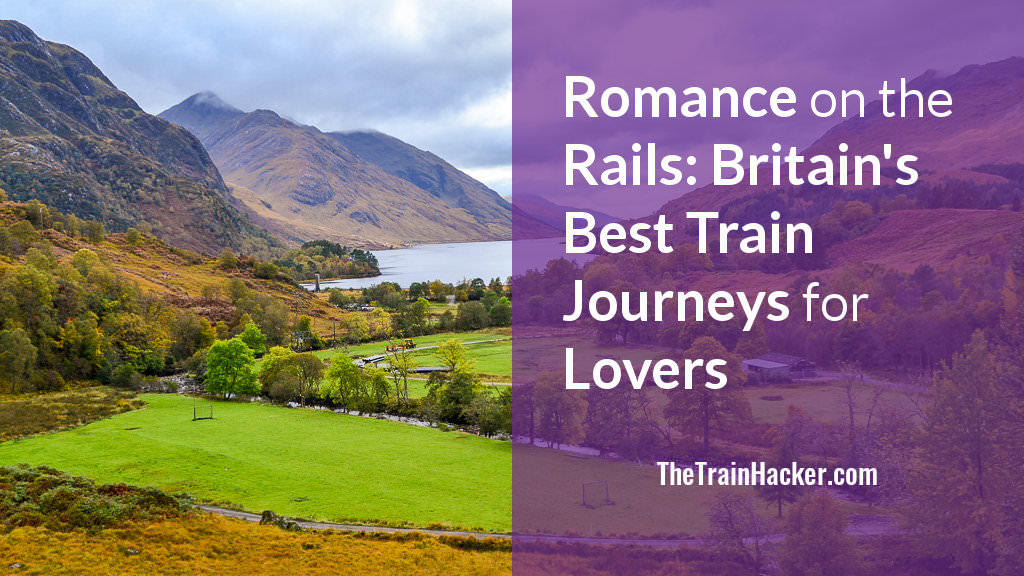 Britain’s train operators finally cottoned on to the romance of the rails and launched the Two Together Railcard, giving couples the perfect pretext to rekindle their spark with a weekend getaway by train.

It’s hard to put your finger on just what it is about a train journey that that seems to go hand in hand with romance. Maybe it’s the hypnotic, gentle rhythm of the rails itself, our nostalgia for a simpler time, or the sheer volume of songs and films that have forged this connection deep in our national psyche.

Whatever it is, somehow it’s hard to imagine Brief Encounter set at Heathrow Terminal or a plaintive ode penned about a ‘Midnight Bus to Georgia’.

But you needn’t go so far of course, since the world’s oldest railway network, right here in Britain, is fairly brimming over with romantic train journeys to choose. With that in mind, here’s our pick of six great escapes. 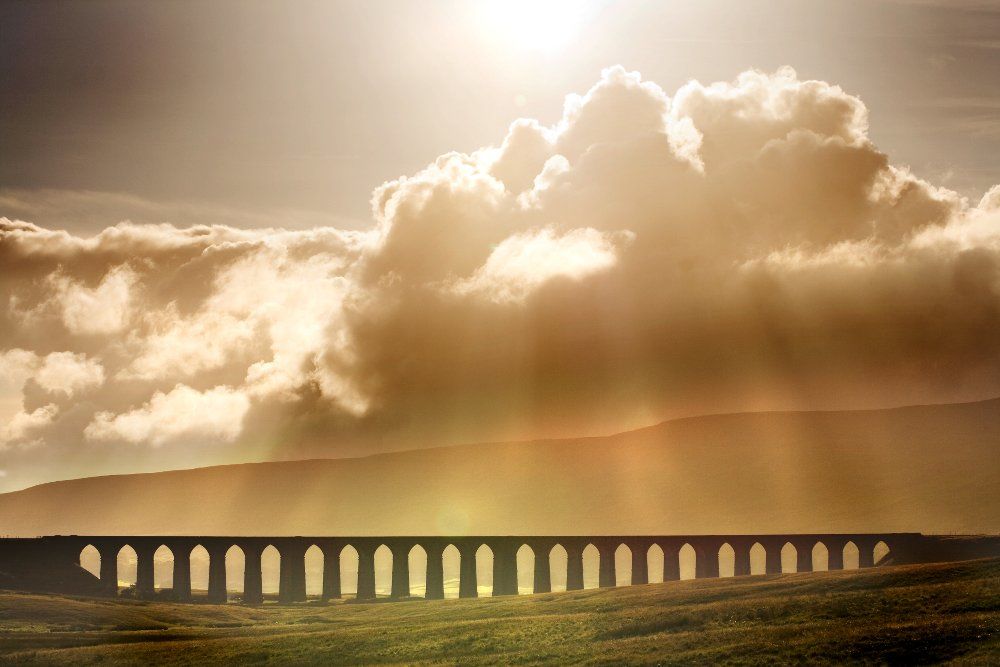 The famous Ribblehead Viaduct on the Settle to Carlisle railway under the yellow haze of an English summer day – Image credit: chantrybee

Some trains link grand destinations, but others are prized for the journey alone. That’s certainly the case with the Settle to Carlisle Railway, which weaves through no fewer than 14 tunnels and 20 viaducts (all masterworks of ingenious Victorian engineering, with special praise reserved for the mighty Ribblehead Viaduct) taking in numerous limestone peaks and deep valleys.

If you’re looking for a romantic train journey in the UK which sums up Victorian tenacity and engineering mastery, the Settle to Carlisle Line is right up there with the best. There are just 11 stops on the 72-mile line, starting from Settle in the Pennine Foothills to the ancient ‘border city’ of Carlisle, via the handsome market town of Appleby.

In summer, their Music & Ale trains should set you swinging to trad jazz tunes and artisan brews. For making the most of the route through the changing seasons, grab a Dales Railcard to save money on your trips. 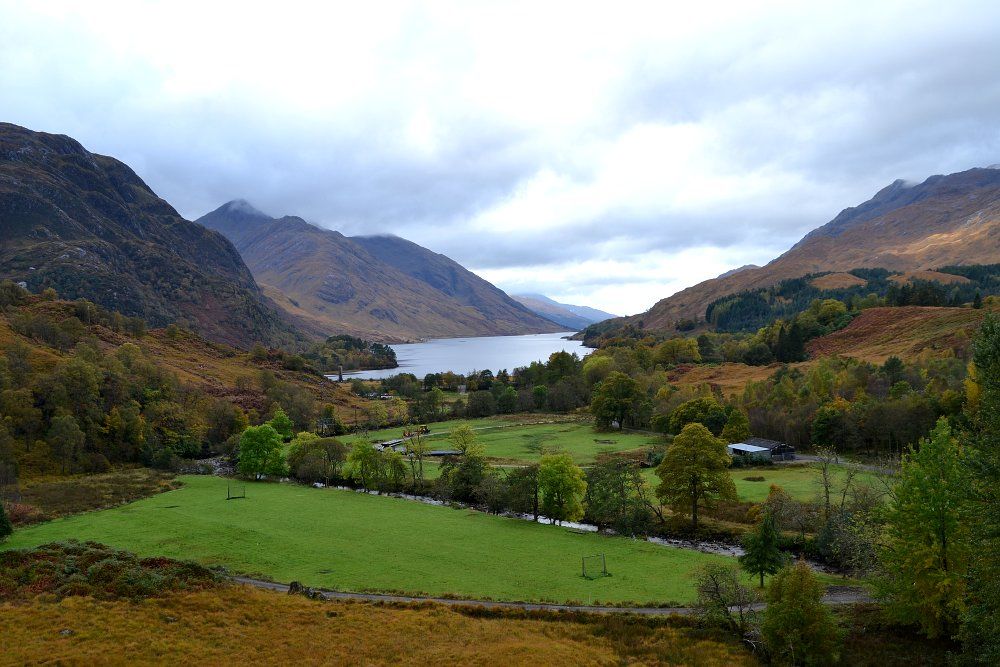 Departing from Glasgow Central, it soon glides through uninterrupted lochs and glens territory before crossing the Glenfinnan Viaduct, famed for its starring role in the Harry Potter films. For some Caledonian romance of a different vintage, take in the nearby Glenfinnan Monument (which is not far from the adventure capital of Fort William), an impressive memorial to dashing historic Highlander Bonnie Prince Charlie.

The train is soon cloaked in stark Highland majesty towards the sweet-as-tablet seaside resorts of Mallaig or Oban.

If you’re young lovers lucky enough to be under 26 years old, be sure to grab a 16-25 Railcard and save on your rail fare.

For extra passion points, upgrade at Fort William for the ‘Harry Potter ‘ Jacobite Steam Train for the final leg on selected spring and summer departures. Crossing the 21-arched Glenfinnan Viaduct on the Jacobite, and looking out towards Loch Shiel, must rank as the romantic view of all train journeys in Britain.

And for the ultimate romantic journey, ride the Glasgow to Fort William leg on the overnight train. Find out how to get cheap tickets and Caledonian Sleeper discount offers.

Not to be outdone by the west, the eastern coast of Scotland packs a punch with Britain’s furthest train ride north.

Winding its way through the firths of Cromarty, Beauly and Dornoch, it soon hits a scenic coastal stretch, through the birdwatching hotspot of Forsinard, before reaching Georgmas, the UK’s most northerly railway junction, before brushing the buffers of Thurso, our northernmost station.

If you’re looking for splendid isolation with your loved one, why not jump off at Altnabreac railway station. With no roads to the station, there’s little danger of being bothered by anyone other than the most hardened of hikers.

For sheer remoteness and escape from the hypnotic humdrum of modern life, the trip from Inverness to Thurso makes the list of the UK’s most romantic train journeys.

Enjoy fine dining in luxury with your dearest other half on the Belmond Northern Belle – Image credit: Railway Stays

From the people at the helm of the legendary Orient Express, the Northern Belle offers the same gilded gourmet service on UK trains between over 60 destinations, with many cities packing plenty of gothic grandeur into their medieval streets.

Onboard, you can expect stunning art deco interiors, impeccable service and lavish 4-course dining. As the scenery unfolds enjoy the finest seasonal foods that Britain has to offer, all put together lovingly by top chefs.

On our trip from Edinburgh to York return, the train followed the regular east coast route, chugging up the dramatic coastline of Northumbria and southern Scotland. The ticket includes guided tours of York’s prime historic sites too.

There’s plenty of romantic British train journeys to choose from with the Belmond Northern Belle including afternoon tea, fine dining, scenic trips and linking up with events throughout the year. If you’re looking for something more luxurious, it’s just the ticket.

Dare we say it, but trains were designed for drifting off into a delicious doze, so you may as well make a night of it and settle into a cosy bunk on perhaps our best sleeper service, the Night Riviera from London to Penzance.

Departing from London Paddington six nights a week, the eight-hour journey gently deposits you at Penzance, at the westerly fingertip of Britain. Before you set off, ensure to enjoy a complimentary glass of wine (or two) at the First Class lounge at London Paddington.

There’s plenty of stops along the way, and you can always jump off early at St Erth and make a short transfer to the art lovers paradise resort of St Ives, where you could stay at the fantastic Tregenna Hotel.

Waking up to fresh sea air and the many wonders of Cornwall rank as one of the romantic experiences by train in Britain.

Sometimes a faceful of fresh foliage can be surprisingly easy to reach. Brockenhurst in the New Forest is just a pleasant 90-minute ride from London Waterloo but feels like a world away, where cattle graze and bike paths snake through beautiful landscapes for miles. The journey is all the more enjoyable knowing that you saved 1/3 on the standard fare with a Network Railcard.

Brockenhurst takes you straight into the heart of the New Forest and is an ideal spot for a romantic rail (and car-free) getaway from London. Get off the train, grab yourself a tandem bike at the station, and whisk your loved one down country tracks of heathland and ancient forest.

Top off your day by taking your sweetheart to one of the many romantic hotels found in the area.

These days so many journeys claim to ‘transport you back in time’, but the New Yorkshire Moors Railway delivers on this promise, with its wood-panelled carriages and happy volunteer staff in immaculate period garb.

The steam journey puffs through some serious ‘Heartbeat country’ between Pickering and the criminally underrated coastal town of Whitby, where stonewalled pubs call their siren song and sheep grazing by the track barely stir. Channel your inner Heathcliff and Cathy on those barren moors, and look out for lapwings flitting about among the gorse.

If you and your loved one get all steamy just thinking about the chugging noise of the engine, the smell of sulphur, and times gone by, you’ll be hard pushed to find a more romantic train journey in the UK. Mature lovers who remember the days of steam would be wise to grab a Senior Railcard to save money on

For those of you who remember the days of steam, grab a money saving Senior Railcard. With 1/3 off rail journeys, you can spoil yourself with romantic train journeys in Britain.

Exeter to Paignton – The Riviera Line

For romance on the coastal rails, the Riviera Line is probably Britain’s finest journey. It has everything from riverbank views, the pick of “English Riviera” resorts while snaking along the coast, and of course the famous sea wall section around Dawlish station.

Get a Devon Ranger day tripper, so you can jump on and off to visit the classic seaside towns of Dawlish, Teignmouth, Torre, Torquay and Paignton. Residents get discounts all year round with a Devon and Cornwall Railcard.

Treat your partner to a scrumptious Devonshire cream tea, before heading off to the beach for a walk or sunbathe if you’re lucky.

Finally, don’t forget to get a little frugal before you canoodle. You can’t put a price on love of course, but make the most of our railcard deals, and you could easily save some cash to spoil your sweetheart with on one the UK’s most romantic train journeys.