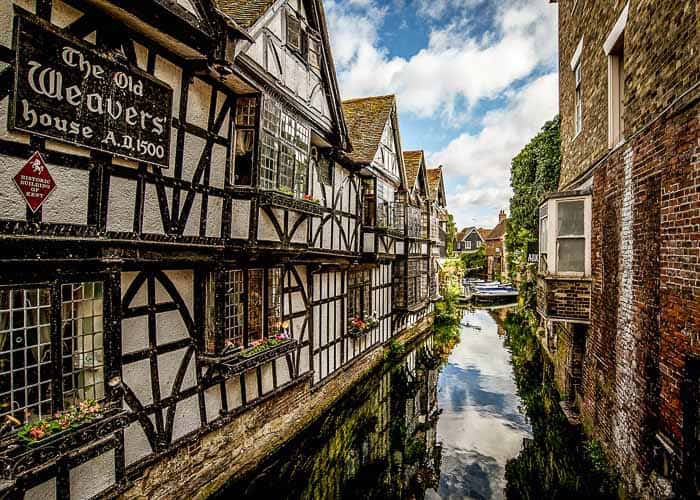 The classic view of the Old Weavers House on the River Stour in Canterbury – image: Adrian Snood

Whether you’re discovering Britain for the first time or a seasoned explorer delving deeper, south England serves up a clutch of cathedral cities. Steeped in history and buzzing with modern life, they are well worth a visit from London.

Here are five of our favourite cathedral cities in Southern England, easily reached by train from London.

Immortalised by Chaucer and well established as a UNESCO World Heritage site, Canterbury punches above its weight in the tourism stakes.

Built in 1077 in Norman style, Canterbury Cathedral became a pilgrimage site a century later after the murder of Archbishop Thomas Becket. On the order of King Henry II, Thomas Becket was slain in the cathedral by followers of the king.

Repeatedly renovated over the centuries, sections of the cathedral’s Quire and some stained glass from the 12th century still survive.

There’s plenty of history to drink in outside of the cathedral too. Quaint independent shops and cafes line the narrow medieval streets. Walk where the likes of preeminent literary masters, Geoffery Chaucer and Christopher Marlowe once trod.

Take in the charming views of the Old Weavers House and Greyfriars on the River Stour. And the picturesque Westgate Gardens – 12 hectares of historic riverside meadow and woodland, and the ruined St Augustine’s Abbey.

The recently expanded Marlowe Theatre, a Curzon independent cinema and the Beaney Museum and Library complement its cultural clout. The latter was built on a Roman Town House site, complete with the UK’s only remaining Roman pavement mosaic.

A lively student population and a high provision of pubs per capita ensure there’s no shortage of places to discover at night.

London to Canterbury by train 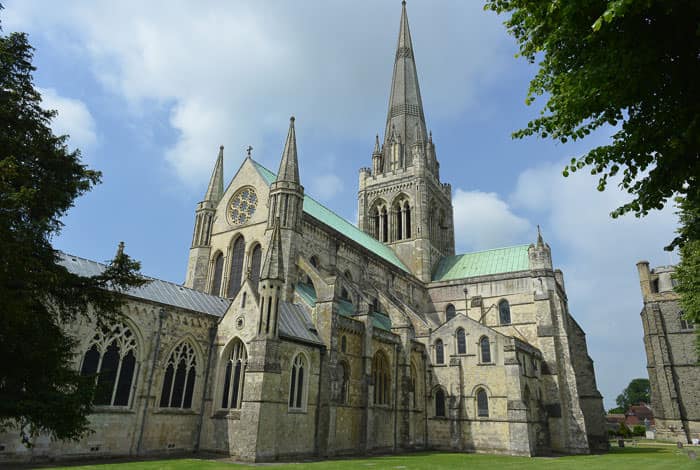 Prosperous, friendly, green and far enough away from the beaten tourist track, Chichester is highly recommended. Surrounded by greenery, the city has stacks of Roman history and all within close proximity to seaside spots.

There’s an abundance of tea rooms and bookshops to enjoy: city walls and Georgian streets to roam. And Brasserie Blanc, which dishes out a soupcon of the great chef Raymond Blanc’s culinary flair at high street prices.

Chichester Cathedral dates back to the 11th century when Bishop Stigand started building on the existing site of a Saxon church. It’s a robust Norman design with an impressive Victorian spire.

The Cathedral is famed chiefly today for its art collection. Medieval carvings sit alongside 20th-century sculptures, paintings, tapestries and other artworks, such as Marc Chagall’s 1978 stained glass window.

One of Chichester’s most inspiring art spaces is Pallant House Gallery. It operates as a hub for ‘outsider art’ thanks to its association with arts charity Outside In. The permanent collection of modern British art includes works by Lucien Freud, Peter Blake and Eduardo Paolozzi, among others.

Chichester also has a thriving theatre scene with an annual festival season from April to November. The Chichester Festival Theatre is one of Britain’s most famous theatres, and there are always excellent shows performed at the smaller Minerva Theatre.

Just a little way north of the city – and easily accessible by public transport – set amid the splendour of the South Downs, you can find many attractions worth exploring.

The stately home of Goodwood House, set in the rolling pastures of the South Downs, has been the family home of the Duke and Duchess of Richmond and Gordon for over 300 years. The ivy-clad Grade 1 listed mansion houses a world-class art collection, including paintings by Stubbs and Canaletto in the Regency-style State Apartments.

While you’re there, treat yourself to an indulgent Afternoon Tea surrounded by Georgian splendour in the ballroom.

The nearby Cass Sculpture Foundation (on the Goodwood Estate) offers over 50 large-scale, family-friendly sculptures to discover in 26 acres of idyllic woodland.

The Goodwood Aerodrome has long been associated with motor racing as the airfield’s perimeter road has been home to Goodwood Motor Circuit since the 1940s. You can still spy all manner of vintage aircraft taking to the skies here, including Spitfires, Hurricanes and Cessnas.

West Dean Gardens is a lush paradise, with a sunken garden and 300-foot-long Edwardian pergola, and a 50-acre arboretum reached on a two-mile parkland walk. The South Downs are within easy strolling distance too.

London to Chichester by train

Direct trains from London Victoria to Chichester take around 1 hour and 30 minutes. From London Waterloo to Chichester, services take about 1 hour and 40 minutes with one change at either Clapham Junction or Havant.

Exeter’s Historic Quayside is one of the most attractive areas of the city – image: Alison Day

Having survived the bombing in World War Two and the ravages of post-war city planners, Exeter is finally enjoying something of a renaissance. There are plenty of reasons to visit Exeter and the nearby English Riviera.

Exeter’s Anglican Cathedral was built using Purbeck marble around 1400. It offers an impressive astronomical clock and 50 misericords (carved wooden seat supports), one of which depicts the earliest known image of an elephant in Britain. And the most extended continuous vaulted ceiling in the world.

The Royal Albert Museum (RAMM) is the city’s most prominent and scooped the UK’s Museum of the Year award in 2012. RAMM’s collection spans a broad remit encompassing zoology, anthropology, fine art, archaeology and geology, housing over a million objects.

You can cross a bridge to reach the Roman wall affording splendid views of the Rougemont and Northernhay Gardens and cityscape.

Browse antique shops lining the historic Quayside or nose around the chic boutiques on Gandy Street in the Castle Quarter. Take a break from sightseeing with a gourmet coffee at Exe Coffee Roasters.

Warehouses on the Exeter Ship Canal Basin have been converted to restaurants, craft and speciality shops. The canal’s mix of old and new architecture and double locks make it an attractive place to walk or cycle down.

Elsewhere in the city centre, you can take in Gothic architecture. And explore the interesting underground passages, once used for water pipes in Medieval times and now open for guided tours. Finally, unwind by sinking a few ales in one of the city’s many olde-worlde pubs.

London to Exeter by train

The picturesque southern English city of Salisbury is known as ‘the city in the countryside’ – image: Alison Day

With its distinctly English atmosphere, timbered buildings and lush water meadows, you can easily see why Salisbury lives up to its strapline – ‘the city in the countryside.’

Completed in 1266, Salisbury Cathedral is one of Britain’s most elegant gothic style cathedrals, with the tallest spire in the country. Over the centuries, great architects like Sir Christopher Wren and Sir Gilbert Scott have presided over restoration work at the cathedral.

Chapter House at Salisbury Cathedral is home to the best-preserved Magna Carta and one of only four remaining copies dating from 1215. The family-friendly interactive exhibition of one of the most celebrated documents in English history is a highlight for many visitors.

You’ll find some of England’s most elegant stately homes here, several in the very shadow of the cathedral. Cathedral Close has both Mompesson House and Arundells, while Wilton House lies just a few miles away.

Military history buffs will want to lock on to the Rifles, the Berkshire and Wiltshire Regiments museum. The museum chronicles their brave exploits in conflicts ranging from the Crimean War to Afghanistan.

A twice-weekly market, the presence of Salisbury Playhouse, the leading producing theatre in the south-west, and scores of traditional English pubs give you added incentives to swing by Salisbury.

Easy side trips from Salisbury include Longleat House and Safari Park, and Stonehenge.

Stonehenge is best reached from Salisbury by the Stonehenge Bus Tour. Stonehenge is perhaps Britain’s most famous and intriguing set of standing stones. This dense complex of Neolithic and Bronze Age monuments has fascinated visitors for centuries. If you’re visiting southern England, even if only for a short time, you owe yourself to get acquainted with them.

Longleat has everything you’d expect from an iconic English stately home, including a maze, a grand staircase, numerous beautifully furnished rooms, and 1000 acres of gardens landscaped by ‘Capability’ Brown. Plus, Longleat has the world’s first safari park outside of Africa. The estate can be accessed easily via train from Frome Station.

London to Salisbury by train

Direct trains from London Waterloo to Salisbury take between 1 hour and 22 minutes and 1 hour and 30 min.

Winchester is another quintessentially English Medieval city well worth making a beeline for.

Winchester Cathedral’s claim to fame is the longest Gothic cathedral in Europe with an equally record-breaking nave. Built in 1093 with limestone quarried from the Isle of Wight, it stands north of the site of the 7th century Old Minister.

The rich in legend Anglo-Saxon St. Swithun is the patron saint of Winchester Cathedral. Until the Reformation and its destruction, his tomb at the cathedral attracted pilgrims as they believed it had miraculous healing qualities.

Winchester Cathedral’s other attractions include magnificent stained glass windows by pre-Raphaelite artists and a mysterious life-size statue of a man holding water by sculptor Antony Gormley. It even doubled as the Vatican in the Da Vinci Code film, a hat tip to its outstanding architecture.

Wander down Winchester’s winding alleyways and flint walls and stroll along the River Itchen. At the Hospital of the Cross, a 12th-century monastery, you’ll be rewarded for your efforts with a Wayfarer’s Dole – a welcome gift of a small beer and a crust of bread.

Enjoy a picnic amid the calming ruins of the Anglo Saxon Wolvesey Castle and pop into Winchester City Mill. Thought to be the oldest working watermill in Britain, it was recorded in the Domesday Book and has stood for nearly a millennium.

Most cities tout their foodie credentials nowadays, but few can boast of having the largest farmer’s market in the country. To get an authentic taste of Winchester, try and reserve a table at the quirky Michelin-starred Black Rat with its dedicated gin menu.

Come in early July to witness the madness that is Winchester Hat Fair, Britain’s longest-running festival of street artists and outdoor performers.

London to Winchester by train

Once you’ve exhausted all these beautiful English cathedral cities, why not make the most of that Railcard and save a third off rail fares to other equally diverting destinations?

You could go on a pilgrimage from London to discover the wealth of historic houses and gardens in the care of the National Trust.

And since summer’s on the way, they say, this could be the perfect time to set your sights on southern England’s prime seaside resorts. All of which is an easy get-away by train from London.