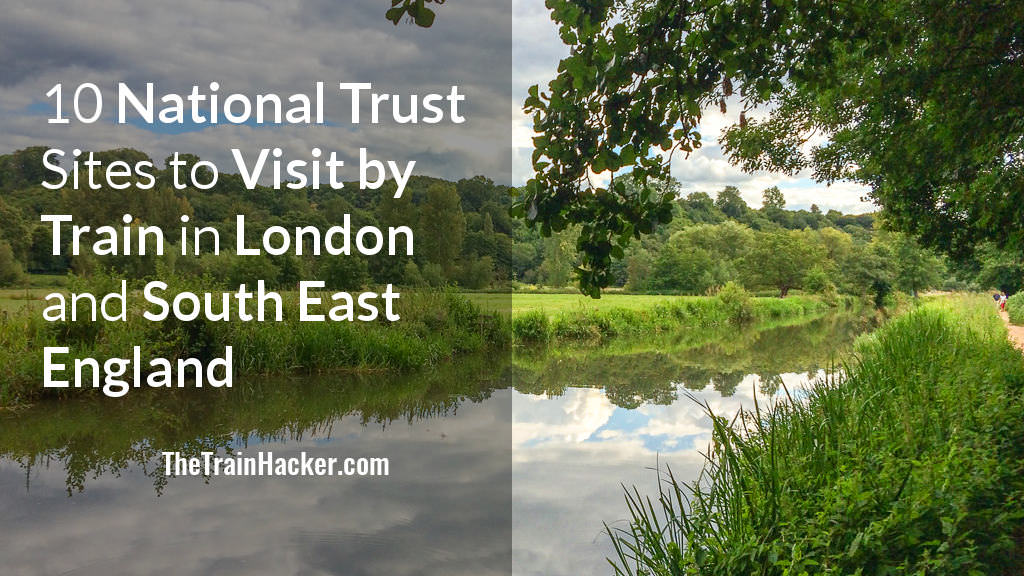 The National Trust looks after over a hundred sites in London and South East England, including historic buildings, country houses and gardens, beautiful countryside, stunning coastlines and even pubs.

Did you know that many National Trust sites in the region are accessible by train? Well, there are many, and we’ve selected places that are less than two miles from a railway station.

All aboard, let’s get on track for 10 of our favourite National Trust sites in London and the South East of England that you can reach by train.

How to Save Money on National Trust Trust Membership

Before you set off, don’t forget to check out the latest 2023 National Trust Membership discount offers. If you are visiting just a few places a year, you will save money.

And, get the latest Railcard offers and discounts to save on your train journey.

The South Downs National Park is hard to beat when it comes to the most beautiful natural landscape in London and the South East. Blackcap is a 623 acre part of the National Park in East Sussex, which runs along a ridge, west of the historic town of Lewes.

It is a classic downland experience with fantastic views over the Weald and the south coast. Take a walk and enjoy the varied flora and fauna at this spot which is steeped in history.

How to get to Blackcap by train

Blackcap is two miles from Cooksbridge railway station which has limited service on weekdays only. Cooksbridge is on the East Coastway line which runs between Hastings and Hove.

Fastest trains to Cooksbridge take the following times from these selected stations:

Alternatively, you can get to Blackcap from Lewes railway station which is four miles away. Lewes has regular connections every day to and from London Victoria, Haywards Heath, Eastbourne, Seaford, Ashford, Brighton and other stations in South East England.

If four miles walking is not possible, there are buses and taxis you can take from Lewes.

Find out more about Blackcap and directions to get there on the National Trust website.

Box Hill in the North Downs shot to fame as it formed part of the London Olympics road race cycling route. It is a great place to explore the Surrey Hills with fantastic views across the surrounding countryside. It’s a walkers paradise, and the National Trust has plenty of trails with downloadable maps.

Or, why not take your bike and tackle the famous Zig Zag road? The 1.6 miles (2.5 km) ride with gradients between 5% and 8% is a big challenge for most cyclists, but the views from the top are worth it.

For most people, tackling the climb with an electric bike is a more sensible option or an electric scooter would be fun. Join the electric revolution with a specialist retailer who offers a price match promise and discount code deals from Pure Electric. They have a huge range of e-scooters and e-bikes with one and two year warranties which makes them an excellent choice.

How to get to Boxhill by train

Boxhill is one and a half miles away from Boxhill & Westhumble train station. It is on the Mole Valley Line which runs between Inner South London and Horsham.

Fastest trains to Boxhill & Westhumble take the following times from these selected stations:

Find out more about Boxhill and directions to get there on the National Trust website.

Ham House and Garden is a grand Stuart era house just a couple of minutes walk from the banks of the River Thames. It has an impressive and internationally renowned collection of paintings, textile and furniture.

The National Trust has restored the formal gardens surrounding the house back to their original 17th-century style. There is also a garden kitchen which produces heritage crops, a wilderness area and summer homes.

How to get to Ham House and Gardens by train

Ham House and Garden are one and a half miles from Richmond railway station. Richmond is on the London Waterloo to Reading line.

Fastest trains to Richmond take the following times from these selected stations:

Richmond railway station also connects to the London Overground and the District Line on London Underground.

Find out more about Ham House and Garden and directions to get there on the National Trust website.

The exterior of The George Inn, Southwark, (built 1677), the only remaining galleried inn in London – © National Trust Images/Andrew Salter

If you like traditional English pubs, you are going to love the fabulous George Inn on Borough High Street, Southwark. It is London’s last galleried inn, and the current structure dates from the 17th century.

On the ground floor is a series of connected bars with plenty of “ye olde” style paintings and fittings, while upstairs there are galleried areas that overlook the large cobbled courtyard. The George Inn is a great place to get a feel for the London of times gone past.

How to get to the George Inn by train

The George Inn is less than half a mile away from London Bridge railway station, a well connected central London train terminus. London Bridge has an extensive network of trains that go to and from the station to destinations throughout London and South East England.

London Bridge Underground station also links up to the railway station and is served by the Northern and Jubilee lines.

Fastest trains to London Bridge take the following times from these selected stations:

Find out more about the George Inn and directions to get there on the National Trust website.

A view of the South Front of the Manor, also showing some bedding schemes. It was the home of Benjamin Disraeli from 1848 until his death in 1881. The garden recently restored to Victorian-style – © National Trust Images/Matthew Antrobus

Hughenden was the home of Queen Victoria’s favourite Prime Minister, Benjamin Disraeli, who lived here for 33 years. Disraeli was also a leading author of that time, and Hughenden Manor provides an interesting insight into his colourful, literary life.

There’s plenty of outdoor space to explore; from restored formal gardens to vast woodlands, and parklands with walking trails.

Also, discover how the estate was used as an intelligence centre in World War Two.

How to get to Hughenden by train

Hughenden is just under two miles from High Wycombe railway station. It is on the Chiltern Main Line which runs between London and Birmingham.

Find out more about Hughenden and directions to get there on the National Trust website.

The west front of Knole, Kent. The central gatehouse was built by Henry VIII between 1543 and 1548, with later additions to the west front in the seventeenth-century – © National Trust Images/Robert Morris

Knole is six hundred years old and comprises of a house, courtyards, deer park and lots more to explore. The house showrooms have a fantastic collection of paintings, furniture, tapestries and hidden treasures.

The deer park is one of the highlights of Knole and the last medieval one of its kind in Kent.

The National Trust is in the process of renovating the place and will add a new visitor welcome centre and bookshop in 2015.

How to get to Knole by train

Knole is one and a half miles from Sevenoaks railway station. It is on the South Eastern Main Line which runs between London Charing Cross and Dover Priory.

Fastest trains to Sevenoaks take the following times from these selected railway stations:

Find out more about Knole and directions to get there on the National Trust website.

Morden Hall Park is a great place to get away from the city to enjoy wildlife and nature. You can explore wetlands, meadows, trees, and the River Wandle and channels which meander through the park.

The Stable Yard visitor centre is a model in energy efficiency, and you can learn about green living inside. There’s also a restored waterwheel, and while it no longer turns, there is modern hydro-electric waterwheel next to it.

How to get to Morden Hall Park by train

Morden Hall Park is one mile from Morden South railway station. It is on the Thameslink line which runs from Luton to destinations in South West London.

Trains to and from Morden South take the following times from these selected railway stations:

Find out more about Morden Hall Park and directions to get there on the National Trust website.

Rosa ‘Raubritter’ growing by the side of the fountain in the walled rose garden in June at Mottisfont, Hampshire – © National Trust Images/Jonathan Buckley

Mottisfont is steeped in history and full of surprises that date back to when it was a priory in the 13th century. In more recent times it was a vibrant hub of artistic activity, and today it has an art gallery with changing exhibitions.

Outside, there is a diverse collection of walled and winter gardens, wide varieties of trees, and a riverside walk. The estate is 1,600 acres of woodland and farmland accessible to the public, with walking and cycling trails.

How to get to Mottisfont by train

Mottisfont is one and a half miles from Mottisfont & Dunbridge railway station across some well sign-posted fields. It is on the Wessex Main Line which goes from Southampton Central to Bristol Temple Meads.

Find out more about Mottisfont and directions to get there on the National Trust website.

A frosty winter scene with swans gliding on the water at the River Wey Navigations, Surrey – © National Trust Images/John Miller

The River Wey and Godalming navigations are nearly 20 miles of part-river and part-canal which runs from Godalming to the Thames river at Weybridge. A towpath along the full length makes it accessible to walkers.

There are six lengths with locks along the way, including the Thames lock where the River Wey joins the Thames. Dapdune Wharf, Guildford is the hub of the Wey navigations and where the barges that used the waterway were built.

There are six railway stations on the route which are all less than a mile away with regular trains from London and the surrounding area. Each of them shows how many minutes walk it takes to get to the waterway.

Find out more about River Wey and Godalming Navigations and Dapdune Wharf and directions to get there on the National Trust website.

Winchester City Mill, Hampshire and bridge spanning the River Itchen. The Mill was first recorded in the Domesday survey of 1086, but was rebuilt in 1744, and is now restored to full working order – © National Trust Images/Phil Ripley

Winchester City Mill is a rare example of an urban working corn mill which was restored to its original use by the National Trust in 2004. You can see the water wheel in action grinding corn which is powered by the River Itchen.

There are plenty of family activities available, and you can learn about the history of milling with working models, presentations and demonstrations. If you are lucky, you may get to see some of the otters that live in the river.

How to get to Winchester City Mill by train

Winchester City Mill is less than one mile from Winchester railway station. It is on the South Western Main Line which goes from London Waterloo to Weymouth.

Find out more about Winchester City Mill and directions to get there on the National Trust website.

That’s me! Chris P King at the River Wey and Godalming Navigations, clearly unable to follow a towpath without a map! – © The Train Hacker images/Chris P King

There’s plenty more great days out in London and the South East by train, so check out the National Trust website. And don’t forget to save money on National Trust memberships and train fares before you set off.